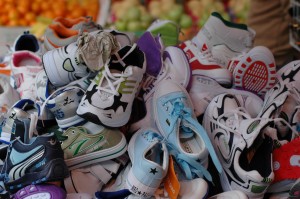 Last month, adidas filed a trademark infringement lawsuit against Forever 21. Adidas has yet again filed another lawsuit, this time against Sketchers USA. Adidas claims the Sketchers has been producing knock-offs, including a sneaker similar to its classic Stan Smith. The lawsuit was filed in United States District Court in Portland, Oregon, where the Germany-based company’s American headquarters are located.

In 1995, adidas filed a lawsuit against Sketchers USA for featuring parallel strips on the side of the upper of the “Karl Kani” footwear by Sketchers. In the agreement “Sketchers acknowledged that adidas is the exclusive owner of the Three-Stripe Mark and “agree[d] not to use the THREE STRIPE DESIGN or any mark confusingly similar thereto to the extent that any form of that mark is entitled to prosecution under state or federal law.” After this agreement, Sketchers offered several more designs that were strikingly similar and subsequent agreements in in 2008, 2010, 2011 and 2013 were entered and settled for Sketchers to cease sales of the above-mentioned shoes.

Adidas has also claimed that “Sketchers clearly intents the Stan Smith Knock-Off to be a confusingly similar imitation of adidas’s STAN SMITH Trade Dress, as Sketcher’s website has been directing consumers who search for adidas “STAN SMITH” on Sketcher’s website.”

In additional to a trial by jury, adidas wants Sketchers to be enjoined both preliminarily and permanently from using the Three-Stripe Mark, Stand Smith Trade Dress, Supernova Mark, cease the offering for sale, marketing, promoting and selling, impoundment and destruction any items that bear the adidas trademark and trade dress, any profit derived from the sale of those same products, and seeks attorneys’ fees, punitive damages and an award for prejudgment and post-judgment interest on all monetary awards.