A geographical indication is defined in Article 22.1 of the Agreement on Trade-Related Aspects of Intellectual Property Rights as “…indications which identify a good as originating in the territory of a Member [of the World Trade Organization], or a region or locality in that territory, where a given quality, reputation or other characteristic of the good is essentially attributable to its geographical origin.” Goods that have a specific geographical origin often possess qualities or a reputation due to that place of origin. 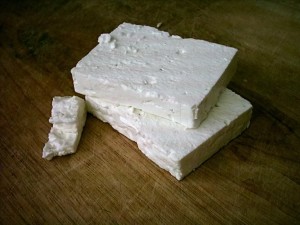 Geographical indications are typically seen on agricultural products. More specifically, an appellation of origin is a special kind of geographical indication used on products that are exclusive to that geographical environment in which the products are produced. For example, Proscuitto di Parma (a personal favorite) is a type of product protected as an appellation of origin. For the product to be labeled with the Parma name, it must be produced from pigs exclusively in the province of Parma located in the Emilia-Romagna region of central northern Italy. Each step of production, the breeding of the pigs, their diets, and final packaging is closely monitored and sealed by the Istituto Parma Qualita.

Unfortunately, obtaining an appellation of origin for a product is difficult, such is the story of feta. Feta cheese often invokes images of Greece, but it is produced and sold in many countries. In the 1980s, Greece passed several laws to protect the feta name and control its production. In attempt to control production, the laws stated milk used to produce the cheese must specifically be from sheep and goats that range freely in the Greek mountains and its island coasts. In 1996, the European Commission issued a regulation acknowledging Greece’s right to its feta appellation of origin. European countries were granted a five-year grace period to change the name of cheeses designated as feta but were not produced in Greece. Since, the European Commission’s regulation has been challenged twice, but issued a final rule in Greece’s favor in 2005. Reluctantly, many imitation cheeses produced in Europe Union have been labeled “salad cheese” or “Greek-style cheese.” Unfortunately, outside of the European Union, countries are not bound by this regulation and may still use the term feta.